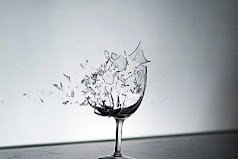 Just as you proceed with caution when you are cleaning up actual broken glass, so should you be when presented with a situation that has been lauded as "shattering glass".

Unfortunately, too many people have jumped on the bandwagon of (wrongfully) assuming that the results of this election heralded in a new era in what is possible for women to achieve.

As a parent of daughters, I realize that there have been two sets of standards in many realms of life for women, and it has been an uphill journey to gain ground and strive for equality.

But the 2020 election was NOT a new era for women in goals that can be achieved, but rather a cautionary tale which instead should be a "How Not To..." guide.

Those who are celebrating it as a victory for new heights to which women can aspire are either sadly mistaken, or they are deliberately deceiving themselves and others.

To truly break down barriers (whether they be based on gender, race, religion, or any one of a million characteristics by which we identify ourselves or differentiate from others) means that a role model should at least be above egregious misconduct.

Unfortunately, what we have in office now is not that type of individual, for several reasons.

First, we should not have someone who changes their identity like a pair of shoes - wearing whatever matches the occasion.

Although originally billing herself as the child of an "Indian born mother" and a "Jamaican born father", this so-called exemplar has morphed herself into a Black woman in order to secure that minority vote.

The Asian Pacific Island Coalition even ran a commercial shortly after the election claiming her as one of their own, which was apparently short-lived on the airwaves.

If you have ever spent time around Jamaicans, they describe themselves as from the Islands, not as African Americans, so her self-rebranding was disingenuous at best.

The second issue is her failure to practice justice when dealing with the law, an ominous foreshadowing of what could happen in the future.

One notable example is her 2010 position on truancy in California - she even found it laughable and joked publically about imprisoning parents who ran afoul of her policy.

As an educator of 31 years, there are many reasons why students become truant, and it occurs at a  disproportiantely high rate among those socio-economic groups who would most benefit from mercy instead of malicious prosecution.

Another significant case, highlighting her history as a prosecutor, is that of Jamal Trulove.

Rather than being the exception, the rule for her career in California appears to have been one of wrongful convictions and insistence on maintaining incarceration for exonerated individuals.

Her legal career has been characterized by her willful disregard for true justice when it interferes with advancing her political career, but it is somehow no different than changing her identity like a toxic chameleon.

As if these issues weren't enough, they are amplified by the moral turpitude exemplified by her affair with Willie Brown.

It isn't the de jure adultery with a higher ranking politician, as that doesn't violate the "community standards" that have become commonplace (read complacent) in today's society (after all, he had allegedly been separated from his wife for at least a decade).

The dilemma is that this adultery was the basis for securing appointments to well-compensated political positions, and later used to leverage other political ambitions after the affair had ended.

So with regret, I cannot uphold this election as an example of shattering a glass ceiling any more than I would praise Jeffrey Dahmer as an innovative cook.

Moral bankruptcy is simply that, and not something to be praised or celebrated.

Instead, we should seek out and lift up those women, and all those individuals, who persist and persevere against all odds.

The true role models are the single parents who work full-time while pursuing an education; the immigrants who marshal all their resources to secure legal citizenship and provide a better future for themselves and their families; the everyday individuals who do not compromise their principles for fame and glory, but rather do what is right even when nobody is looking.

This is the parting glass that I lift up to you tonight!