Since most "essential workers" are NOT receiving any extra pay/benefits during this time, why doesn't the US Government step up to give them more than just a $1200 check?

After all, pretty much everyone is getting that check even if they aren't working or on the front lines with that ever-present infection risk.

You could place time/dollar amount limits on these options, but they should be made as non-taxable income.

Because of the financial strain from the impact of COVID-19 on the economy, many businesses/employers can't afford to give bonus pay to those employees who continue to stay at work providing a minimal sense of normalcy for the rest of us.

Someone needs to step up and do the right thing!
Posted by River Life at 8:43 AM No comments:

"When are we ever gonna have to use this?"

As a teacher, my math students used to ask me that question frequently when they couldn't see an immediate application for a skill in their lives.

I wish that more of you had paid attention when your teachers had presented simple statistics (mean, median, mode, and range) because it might help you have a better grasp of what is occurring with COVID-19.

Let me reteach you now using the data from where I live.

St Lucie County lies directly to the north of me:

You might not think that 9 cases is much, but lets examine the range (the actual lowest and highest values in a set of data).

Many of you should be concerned that two out of nine victims are under the age of 65 (the lower value of the range that used to be considered "at risk").

Average? Add up all the values and divide by how many there are.

Well, we don't know six of the numbers, but a little algebra can give us an idea. Using the letters a through f to represent the ages of the six unknowns, we can write the following equation:

Then we work to solve it as follows:

What this means is that the remaining six people are clustered around the age of 49.

This closer look demonstrates that the majority of the cases in St. Lucie County are under the age of 49 - which lands them in a group that previously was not considered at risk.

With a little bit more insight into the statistics, look at this morning's snapshot of Palm Beach County to the south. 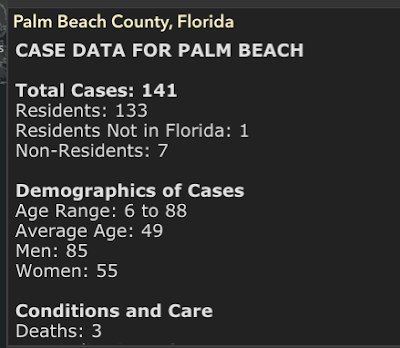 Once again, the average age is 49 (which means around half of those diagnosed are under the age of 49). But what is more troubling is that the range is 6 to 88.

Six?? Children were supposed to be at low risk for this illness.

But consider this - if a child gets sick, even with mild symptoms, they have lowered immunity.

Lowered immunity means that if the child is exposed to other conditions - strep throat, staff infections, other bacterial or viral infections, they are far more likely to get a secondary illness.

Yes, school is out indefinitely and many people are beginning to appreciate the job that teachers do for 180+ days a year, but that doesn't mean you should entertain your children by taking them out into an environment that is a health risk. 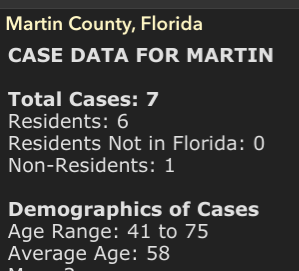 Now that you have a better grasp of the math for these simple statistics, look at Martin County. Follow the example from Palm Beach County and see if you can extrapolate (predict) the ages of the diagnosed cases.

Are you there yet?

Approximately half of those cases are under the age of 58. Yet initially the high risk age group began at 65.

Why the difference for all these counties? Failure to take the health threat seriously. Even worse, behaving in a way that directly countermands the safe guidelines.

"It's hot enough to kill the virus!" Really? Human body temperature is around 98.6 degrees, more or less. When is the last time the temperature got that hot for a even an hour  or two (much less a few days)?

Indicators are that this virus prefers hard/non-porous surfaces (like boats, jet skis, "refreshment" bottles and cups and cans)...you get the idea.

Let me ask the question differently.

I'm not asking if you are willing to stay home for 15 days.

I'm asking if you think 15 days staying home is a reasonable price to pay for the life of your grandparents, parents, elderly aunts and uncles, young family members.

Can you give up two weeks to help ensure that you aren't the person who inadvertently causes the death of another?

Now that you know this isn't just an "old person's problem", are you willing to temporarily change your behaviors?

Do the math for yourself. It's not hard to figure out!

Posted by River Life at 4:29 PM No comments: