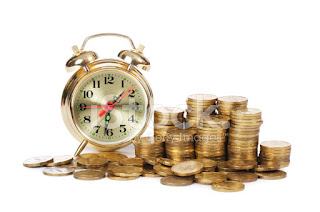 The alarm goes off, you go to work, often getting shortchanged on your breaks and mealtimes, then clock out at the end of your shift.

You head home to manage your own family and household, then get up the next day and do it all again.

Dolly Parton summed it up best in her anthem to the workforce, "9 to 5".

This year, the inconceivable happened to many hourly employees who worked for "essential businesses" - the job that was helping pay the bills became one that was also a potential health risk to themselves and their families.

To add insult to injury, their friends and neighbors who worked for business that closed down not only got unemployment, they "earned" the equivalent of a $15/hour 40-hour work week "pay" on top of it.

But these dedicated individuals continued to work, often no longer being allowed overtime, and frequently being subjected to testing for COVID19. (For those of you who don't know, it is an invasive process up the nostril with pressure and friction applied.)

These non-salaried employees are paid AFTER they have put in the hours, and based on the actual time that they worked.

So can you even comprehend when payday rolls around, and you have less than half of what you are due in your check? Or when you check your bank account and there was no deposit?

Such was the situation this morning for the employees of a healthcare system. 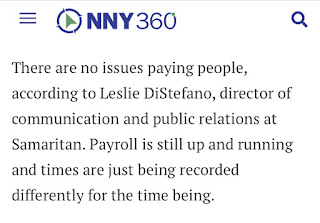 This is a screenshot from a July 30, 2020 article about Samaritan Medical Center/Samaritan Health Systems located in Upstate NY.

Yet this morning's paychecks were anything but "normal", and these employees were unilaterally shortchanged.


Samaritan issued a letter to employees on Tuesday, August 4, explaining that they were going to make some adjustments to pay, with "new" employees having 25% of their check withheld for "taxes" and the remaining employees receiving a paycheck the same as their prior one.

Let's ignore the fact that 25% is an amount in excess of what is normally withheld on minimum/low pay employees for taxes, and arbitrary figure.

Those "pre-existing" employees were finally allocated overtime hours at the conclusion of their prior paycheck, and many of them took advantage of the situation after moths of reduced hours, and so were entitled to far more pay than the prior check would indicate.

For many of these individuals, the amount they received was far less than 50% of the amount due them for hours they already worked.

These are frontline, essential employees in healthcare.

These are the men and women who have put their lives in harm's way on a daily, no wait, hourly , basis to help protect, care for, and heal our most vulnerable.

These are the people who worked at nursing home facilities in a state where the governor saw fit to deliberately send COVID19 individuals.

These are the individuals who did NOT receive a $600 a week bonus from the government to stay at home and do nothing.

These are the hardworking people who have NOT received any type of bonus or compensation from their employer.

And these are the people who just were given a virtual flipping the bird salute for their dedication by Samaritan Medical System.

Apparently, this same organization was able to pay $2 MILLION dollars ransom to malware perpetrators who hacked their system and held it for ransom, apparently claiming that the FBI directed them to do so.

This healthcare organization is beginning a systematic replacement of their computers, at a final cost in excess of $2 million.


And yet they can't provide their employees fair, timely, and equitable compensation for time and hours that were already worked.

Essential employees have been front and center throughout this entire crisis, often taking verbal abuse from others, as well as being underpaid, and now unpaid, for their dedication to their professions and employers.

Is it too much to expect an employer to do the right thing??

Apparently this employer has been forcing employees to sign letters stating that they will accept the "adjusted" pay for as long as necessary.

Statements from the administration about how long it will take involve estimates of up to eight months.

They (through their representatives) are telling the employees that if they don't sign the letter, they will not receive their back pay!

So, how legal is it to refuse to pay employees for time worked?

This is beginning to sound a lot like harassment and extortion to me.

Class action lawsuit anyone?
Posted by River Life at 9:52 AM