COVID-19 As A Metaphor for Social Media Behavior 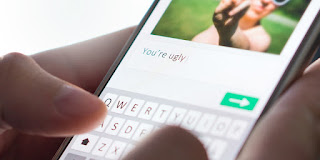 After an unfortunate social media episode the other day, I came to a realization.

COVID-19 behaviors are just a public manifestation of what has occurred behind screens and keyboards for over a decade now.

We live in a society (both here in the USA as well as in quite a few other countries) in which it has become routine, commonplace, and even acceptable to say and do things in a virtual environment which would be considered outrageous and unacceptable in face to face interactions.

Really? Would either of these two individuals have walked into the middle of a real-world conversation with three family members, after eavesdropping, and directed comments at one of the three whom they have never met?

I would hope not, but after the public behaviors I have seen exhibited during the COVID-19 coronacrisis, I am no longer sure of the innate common sense of many members of society.

Rather, in my perception, the social media behaviors which have long been festering behind closed doors and furtive texts and posts have now exploded into everyday life like a pustule. Many individuals are no longer able to distinguish acceptable behavior from flat-out rudeness and this has become evident in how they conduct themselves in public.

Remember the scene from Alien? The snarky comments from strangers, the cyber bullying, the inappropriate interchanges have have exploded full bore, with teeth and an insatiable appetite, out of the virtual realm and into real-life encounters.

Case in point? One of my co-workers is an amazing guy who is always ready to help others and has a vast wealth of knowledge in a number of areas.

The same night I was "schooled" in having to passively accept being attacked on social media, he was confronted in real life for no apparent reason. He offered to help a couple who were patronizing our place of essential employment. Initially they declined assistance, but then the wife asked him a question. Just as he was attempting to respond, the husband began screaming at my co-worker, liberally using profanity and insisting that his wife leave the store with him.

He repeatedly informed my co-worker, at an extremely loud volume and peppered with profanity, that he needed to learn "customer service". The irony is that my co-worker was one who bends over backwards to help customers and meet their needs.

There were several other customers who witnessed this episode and couldn't understand what happened, as the outburst was unprovoked.

Unfortunately, this was not an isolated incident. Patrons in our workplace have refused to follow social distancing guidelines for employees and made statements to the effect of "If you are that f***ing paranoid, stay the f*** at home!", calling employees an a$$ repeatedly for refusing to return stained/damaged merchandise, and otherwise exhibiting socially detrimental behavior.

One individual insisted on paying in cash, and when told "no" threw a product on the counter, breaking it and propelling parts of it into another customer.

Another customer, when the restriction on cash was finally loosened, licked his fingers before touching each bill and then tried to press it into the hand of the cashier.

What immediately comes to mind is the concept that "there are no rights without responsibilities". People have been spewing that they have the "right" to congregate and behave in ways that can contribute to the spread of of COVID-19, without being willing to assume the responsibility for the consequences.

Unfortunately, the consequences in this case can prove fatal to individuals of all ages, whether or not they are immuno-compromised. One of my co-workers whom I am honored to call a friend contracted COVID-19, unable to breath with a high fever. This virus is real and a real threat, not a myth.

And how does this relate to social media behavior? For years individuals have felt free to post and comment whatever strikes their fancy, regardless of how it could affect anyone. They have relied on the relative stealth afforded by not having to look a person in the face.

Unfortunately, now that has spilled out from behind the keyboards and the screens and is occurring in the real world. Perhaps the enforced "stay at home" blurred the already tenuous boundaries in some of these individuals minds and allowed them to lose all pretense of civility.

Is this really what we have become as a society? Maybe now is a good time to become introspective and examine how we really would like to be seen as an individual and as part of a bigger organism.

But somehow, I feel like I am preaching to the choir and my musings will fall on ears that are deaf to the wake-up call that they desperately need.
Posted by River Life at 6:59 PM