Throughout the Jon Massey Case we encountered multiple instances of highly suspect behavior.

Ruby was allowed to have a tablet at Christmastime in 2012 which she then used to "mysteriously" connect to the Internet (under the supervision of her foster parents). She began contacting a number of witnesses for the defense asking/telling them to not make statements, not testify, etc.

Subsequently one of the individuals, who had signed TWO affidavits expressing her disbelief in Ruby's story, totally reversed her testimony at trial in February 2014.

That tablet also "mysteriously" "burned up" within a week or two of the defense's discovery of Ruby's actions.

In May of 2013 Ruby joined the track team at her school, despite being diagnosed with flat feet and running being a sport that caused her pain, and as a member she traveled to one of her former schools. While there she approached at least one defense witness and told that person to "stop signing statements against me" and "don't testify".

The DA's office sent an "investigator" to "interview" multiple defense witnesses, and the investigator demanded that each witness who agreed to the interview tell everything that they would testify regarding.

When Jon Massey's mother failed to return his phone call within three hours (she had already left a message with the DA's office that she would NOT meet with him), he called the NY State Police claiming to be concerned about her well-being, and sent them to do a "welfare check" on her apartment.

The ADA served a trial subpoena on at least one of the witnesses at 11:30 pm - which was contradictory to protocol.

Most interesting, however, is the actions of the DA herself (not just one of her underlings). 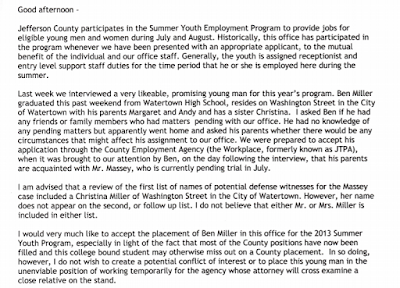 Let me paraphrase this email - it sounds like "We are offering a job to the son of two of your witnesses, but the job offer disappears if those witnesses actually will be testifying".

The email doesn't mention that the same message was conveyed to both parents of the young man in question.

Surprisingly enough, both parents maintained their status on the witness list, because they had both known Ruby for over nine years and had witnessed her behaviors over the years PRIOR to Jon Massey entering the household.

If this case was so "transparent", why all the actions of multiple parties towards defense witnesses that have the appearance of harassment and intimidation?

Time to stand up, speak out, and expose a corrupt system!