In August 2005, the US Department of Health and Human Services issued a report on federal foster care financing (click here for the full report).

What is most striking is that the report lists quite a few failures in the funding system that have not been addressed at all in any type of reform.

A sample is as follows (directly quoted from the report):


"The current funding structure has not resulted in high quality services."

"The current funding structure is inflexible, emphasizing foster care.  Title IV-E funds foster care on an unlimited basis without providing for services that would either prevent the child's removal from the home or speed permanency."

Again, it is all about 'cash for kids'.


"Foster care services are intended to provide temporary, safe alternative homes for children who have been abused or neglected until such time as they are able to return to their parents' care safely or can be placed in other permanent homes. Federal foster care funds, authorized under title IV-E of the Social Security Act, are paid to States on an uncapped, “entitlement” basis, meaning any qualifying expenditure by a State will be partially reimbursed, or “matched,” without limit."

In other words, there is no incentive for states to return an child to their parent, and there is actually financial reason to keep the child in foster care for as long as possible.

Preventive services would mean reunification with the family. 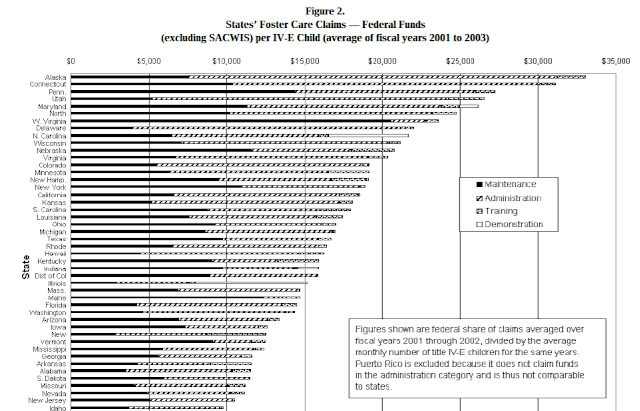 This table is very interesting - it shows that the states which collected the most money for "maintenance" (actual foster care) are West Virginia, Pennsylvania, Nebraska, Maryland, and New York  - in that order. In other words, those five states are maximizing their revenues by putting kids in foster care and keeping them there as long as possible.


"Funding sources for preventive and reunification services, primarily the Child Welfare Services Program and the Promoting Safe and Stable Families Program funded under title IV-B of the Social Security Act, are quite small in comparison with those dedicated to foster care and adoption."

The federal funding streams encourage foster care and adoption, rather than reunification.

The report repeatedly cites failures in record keeping and accountability by the states, as well as the issue that reunification is not fiscally rewarded, and it is more lucrative for children to be placed in foster care or adopted out rather than being left with or returned to their families.

The system is broken, even the feds have been aware of it for at least ten years!

It is time to stand up, speak out, and expose CPS!
Posted by River Life at 6:05 PM