Delta is the New United

What are some of United Airlines claim to fame in recent years?

All these are incidents that made headlines for United Airlines, and made people realize that even though they paid money for a service, the employees can act capriciously and make false claims to deny even paid customers access to flights.

Well move over United - Delta Airlines is taking a page out of your poor customer service handbook!

On Sunday I was flying to West Palm Beach, FL from Syracuse, NY and was treated to an example of this nonsense.

I have been a TSA PreCheck traveler for over two years, and have frequent flyer accounts set up for all the major airlines that include my Trusted Traveler Number.

When  I examined my boarding pass in the Delta app, I realized that somehow the TSA precheck hadn't been issued on my flight.

En route to the airport, I called Delta to correct the situation - something I had previously done on several occasions with American Airlines, successfully I might add.

Imagine my surprise when the online agent told me that I would have to "check in again" on the app in order to get the boarding passes fixed.

Even more amazing - this was the message that I got from the app for my flight. Needles to say, my boarding passes had completely disappeared from the app and I was unable to retrieve them. 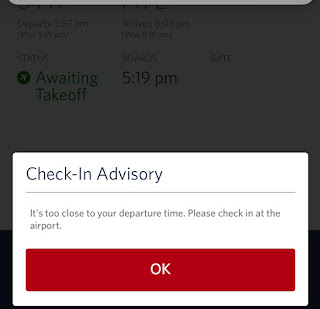 When I informed the online agent of this issue, she told me that I would be able to print them at the self-service kiosk or with the agent at the counter.

For those of you wondering why this was an issue - you cannot go through TSA without a valid boarding pass, which the Delta online agent had managed to delete from my app.

Guess what...the advice the online agent gave me did NOT work!

The kiosk gave me the same message as my app.

When I tried to get assistance from an agent at the counter (three of them were chit-chatting with each other and not paying attention to whether customers needed assistance) I was also in for disappointment.

I had to loudly say "I beg your pardon! Could someone print my boarding passes?" before I got any of them to notice me.

The agent who reluctantly agreed to help me listened to the problem, and then told me that he "wasn't allowed to print boarding passes".

I once again explained that a Delta online agent had deleted my boarding passes from the app and that I wouldn't be able to go through TSA without them, and he said "Why didn't you just go through without TSA PreCheck?"

Somehow he didn't comprehend that a Delta agent deleting my boarding passes meant that I wouldn't be able to get through TSA at all.

He said he would call upstairs and ask for permission, but stated that he "Didn't have to print them."

After he called and printed them and handed them to me, he stated "The door closes in 10 minutes, so you'd better hurry," and I held back on the obvious - that he had taken more than 10 minutes to provide any customer service...add on the kiosk failure time and we were up to 15+ minutes of delay BY DELTA!

As I left, I stated "I have never had to deal with this shit from American Airlines," which led to the agent telling me "Don't swear at me or we don't have to let you fly!"

Nice! Apparently these days you aren't allowed to offer a critique of failed customer service without the airlines denying you travel.

When I went upstairs, the gate agent told me that "I didn't have to allow your boarding passes to be printed!" and "I don't have to let you fly because you swore at my agent downstairs!" and he followed me halfway down the boarding ramp repeating those phrases. 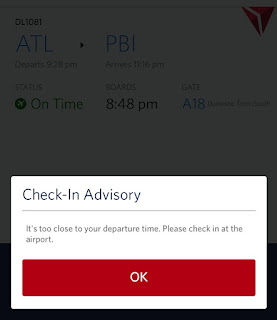 So, let's clarify the situation:


If I worked at Delta Airlines management/customer service I would be far more concerned about the following issues:
Frankly, what I went through with Delta was a load of crap...feces...excrement...shit! They were at fault in the process and failed to remedy the situation in a timely and stress free manner for the customer.

My recommendation? Don't fly Delta Airlines unless you have no other options!