Bully on the Bench!

What do you call the kid in school that deliberately picks on the autistic students?

What do you call the kid in school that deliberately picks on the "emo" kids who appear to have depression issues?

What do you call the kid in school that deliberately picks on the "special class" students that are "slow"?

The name that probably comes to mind for all three of these situations is "bully", and you would be right. Anyone who picks on those who are unable to adequately defend themselves due to these characteristics is in fact a bully.

And what happens when you put a bully on the bench? Allow an adult to be in a judicial position where some of the defendants that come in front of the court are autistic, or depressed, or of low IQ?

A leopard doesn't change its spots, and an old dog doesn't take to new tricks.

Maybe the judge justifies this behavior as "culling the herd"...after all, wouldn't society be better off without these people? They drain public resources and are a potential nuisance. (All of this is stated with heavy sarcasm from my end, BTW.)

In Jefferson County, NY, we have a judge who is demonstrating quite a track record lately. The decisions handed down from his bench in cases that involve individuals with disabilities do not conform to case law, are designed to suppress evidence and secure convictions, and most of all, do not hold up under scrutiny.

I've already detailed a lot of the disingenuous behavior and malfeasance by DSS, the District Attorney, and the Judge in the Jon Massey Case. Jon had long term depression that predated any knowledge or involvement with "Ruby" by around ten years, yet the depression was used as "proof of guilt" in her false allegations. The judge also willfully misapplied the "Rape Shield Law" in order to cover up Ruby's true motives and continue the persecution.

I've also blogged about Nick Nicorvo's Case. Nick has Asperger's Syndrome, and although extremely bright (he graduated with a Regents Honor diploma a year early, despite being incarcerated) he does not have the appropriate social skills and is characterized with a strong desire to please others. These qualities were capitalized on during the course of his case.

The latest in the saga is Paul Priest's story. Paul is an adult who has learning disabilities that diminish his capacity. Paul is extremely willing to please others, and is very compliant with those who he perceives as authority figures.

Paul was arrested based on the allegations made by a teenage girl (sound familiar to the Jon Massey case?). There was a subsequent "trial", and Paul was allowed to plead guilty and totally waive his right to a Grand Jury. The odd thing is, the charges against Paul meant that he was not legally able to waive these rights.

You would think that an experienced judge (on the bench for 15 years) and an experienced DA (at least the same amount of time) would know that such a waiver of rights is not allowed. It wasn't up to Paul Priest to know. 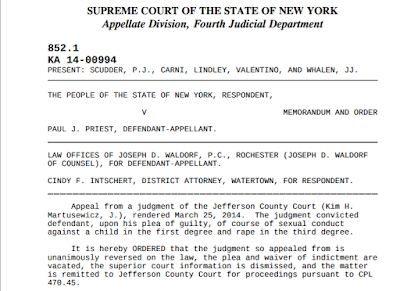 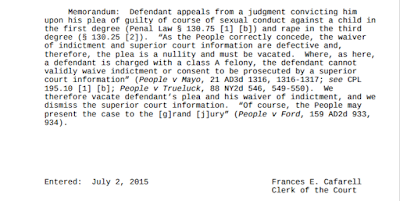 What's interesting is that this case immediately followed on the heels of the Jon Massey case. The appellate decision in Paul's case means that everything starts over at square one. There was the initial expense of the first trial, the expenses involved in the appeal, and now there will potentially be a new trial for Paul. More taxpayer expense simply because the judge, and the DA, thought that they would be able to railroad Paul simply because he wasn't bright.

Given that Jon's, Nick's, and Paul's cases all went through within a year and a half of each other, this is a disturbing pattern. A judge who should be ensuring justice appears to be padding his resume by denying justice to those who are least able to defend themselves.

These days, there is constant discussion about bullying in the classroom. Unfortunately, it is a something that isn't limited to one area. In Jefferson County, NY, there is a bully on the bench, hiding behind his judicial robes and using his position to deny justice and assert power.

It is time to stand up, speak out, and expose corruption!
Posted by River Life at 7:11 AM